Smartphone companies are coming up with better and better camera setups every year and it won’t be too much to say that smartphones are now even smarter at replacing the point and shoot cameras we are used to.

But, is it completely true that smartphone cameras are overruling the point and shoot cameras?

Well, in my opinion, not just yet! maybe in the future, smartphones could be that smart!

In this article, I will get you some points on why the Point and Shoot cameras are still better than Smartphone cameras and why!

Zooming function is one of the most important features in any camera, no matter what type of camera it is. When you need to get a close shot from a distance, you need to zoom in to the subject, but your smartphone doesn’t allow you to zoom in without losing the quality of the picture.

A smartphone camera doesn’t come with an optical zooming mechanism, and it has to cut through the picture itself and digitally zoom in by losing the pixels.

And this is not actually zooming in the first place, it’s just a little enlargement of an image, losing quality. But a point and shoot camera come with an optical zoom lens, which allows you to zoom in without losing any detail of the subject.

A camera’s imaging sensor is the main part that takes the photo by collecting the lights, colors and turns them into a digital signal and shows you on the viewfinder or the display.

When you have a fast-moving object to capture, such as in sports photography, you need incredible control over the shutter speed of your camera.

A smartphone camera cannot really do a good job in this situation, even some entry-level point and shoot camera cannot do any good at controlling the shutter speed.

Because, the better image quality you want from the camera with a fast-moving object, you need more advanced shutter speed controlled lense.

With a good point and shoot, you can have better control over the shutter speed and capture a fast-moving object with high-quality detail. You don’t have to let a part of your favorite player’s body get blurred when running and getting captured by you. That’s why professional photographers carry a point and shoot camera in their pocket, just in case.

Almost any photographer has a fascination for macro photography for sure. But, taking macro shots with a smartphone’s camera is almost impossible while taking macros with a point and shoot is pretty common even with the entry-level once.

Many point-and-shoot cameras can focus on the subject from a distance of less than half an inch. Using the point and shoot camera’s larger image sensor, you can even create a shallow depth of field while taking bright Marcos.

This feature of the Point-and-shoot cameras are used in sports photography or to capture subjects with fast motion, such as a bird in the wild photography.

You can use this awesome feature when you are in the gallery, watching your favorite player playing in the team, running so fast, you can capture him on the run without getting him blurred out of the frame because of the speed he has.

Using this feature, you can capture multiple photos within a very short time like 15 to 40 photos in 1 second or less! This helps a photographer to get a perfect shot of a fast-moving object.

This feature is still evolving in the smartphone industry and not so widely available yet in smartphones, the few smartphones have this feature, come with a big price range.

Although very high-end smartphones are getting to have this feature these days, point and shoot cameras still offer a higher quality image stability.

This enables the lens to stay still while you are running, moving or in a sport where you have to move your camera a lot. This staying-still helps you to shoot more stable photos and videos.

This is why point and shoot cameras are more preferable to take photos and videos than smartphones.

Image quality is a fact

When you compare the overall image quality, because of bigger sensor size, better stabilization, better control over the shooting mood, control over white balance, exposure control, focusing power, a point and shoot camera still can take better photos than a smartphone and deliver more crisp photos with better resolution.

A smartphone cannot compete for a dedicated camera only for shooting great quality photos, because the extra-large sensor and extra effort to the camera unit make the camera stand out.

If you are familiar with bokeh imaging and portrait magic shooting, It’s more of an impossible task for the smartphones to make a bokeh image as much as a camera can. This happens because of the larger camera sensor and more control over it.

You can make magical bokeh images with a camera with a dedicated bigger sensor to make bokeh images and better portrait images.

Although the modern cameras from the high price range are coming with double and Tripple camera setups, you can now take a fair amount of bokeh into your image, it’s still not developed to give in a good fight with the larger sensors of the dedicated camera world.

You will be astonished to see the differences between two bokeh photos taken by a camera and a  dedicated point and shoot camera.

When it comes to aesthetics, a point-and-shoot camera can give you a lot more aesthetic look to the outfit compared to a smartphone.

When a smartphone is just a phone which can shoot photos as well, a camera is a dedicated device that will not only deliver good quality photos and videos but also make your overall look quite a good one.

Makes you stand out of the regular people

Each and everyone is holding on a smartphone for sure, but you are here with yet another device, dedicated only to take good quality photos. It stands for your personality and it makes people identify you as a perfectionist and a good person with a dedication to great things.

It also says that you are a professional doing everything correct around you.

Control over the shooting modes!

With a point and shoot camera, you can have way more shooting modes than a smartphone. While doing photography, you will have more control over the shooting scenes and modes.

If you are using a smartphone for photography, you cannot have a lot of shooting control over your camera. With a good point and shoot camera, you can have a wide range of physical control over the manual control.

With a smartphone, you can play somewhere with the ISO or white balance at most, but you cannot tweet the other criteria that make a great manual camera to deliver the great image quality and get and output just the way you want.

While doing photography, you may need to change the lens for a particular scene or special shots like macro photography or fisheye photography.

If you are not into full-professional photography, rather a semi-professional one and trying to get some decent shots without having to carry a full rig of camera setup, you can consider having a point and shoot camera, because Smartphones are still phones and it can save battery and storage of your smartphone! 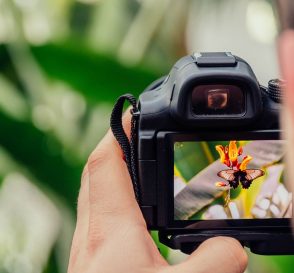 “Photography is an art of observation. It has little to do with the things you see and everything to do …
Guides|